Overview & Effects of the 2020 Design Law Revision in Japan ( Part 1: Expansion of Protection Targets and Establishment of New Design Rights )

On April 1, 2020, the revised Design Law came into effect in Japan. The revisions (also called “amendments” in this text) are so drastic that even the matter subject encompassed by the Design Law has changed, causing major changes in the way the Design Law should be applied in the intellectual property management (scope of design survey, maintenance of design rights, ideal methods of brand protection, etc.) of businesses. The revision also contains many minor amendments that have additional impact.

In this article, I would like to focus on the following two major revisions, which are particularly closely related to design practice:

(1) Expansion of protection targets and establishment of new design rights (image design, building design, interior design), which will be discussed in Part 1 of this two-part article, and

(2) Expansion of related design system, which is discussed in Part 2 of this article.

1. Expansion of protection targets and establishment of new design rights

The major feature of this law revision is the expansion of protection targets and the establishment of new ones. Specifically, the scope of protection of “image design” is expanded, and “building design” and “interior design” are newly added for protection (see Fig. 1 *Note 2). 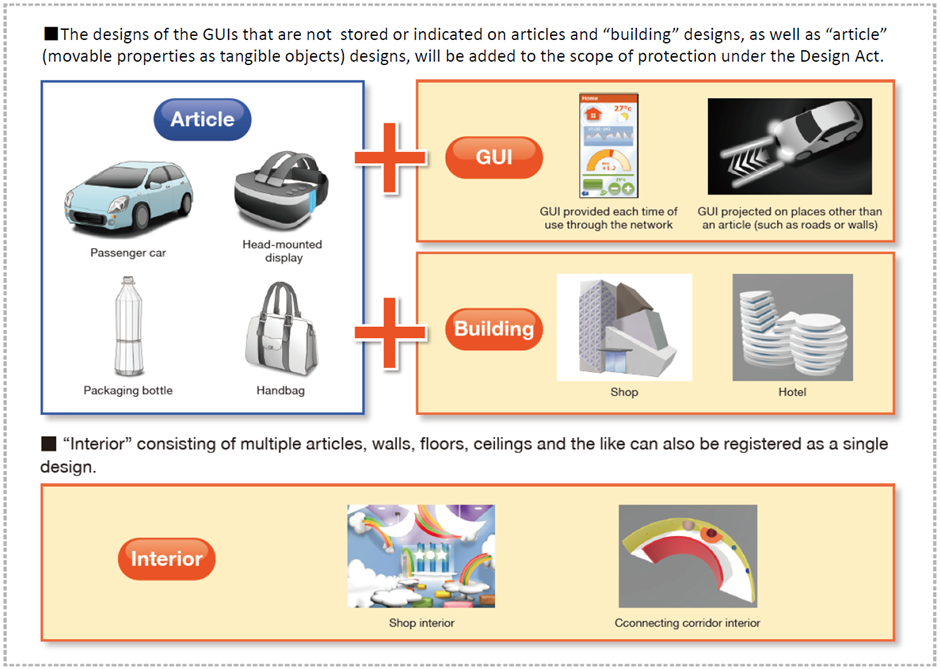 Since the overall protection target of the Design Law was previously described as the “shape of goods, etc.”, it was necessary to link goods with images. 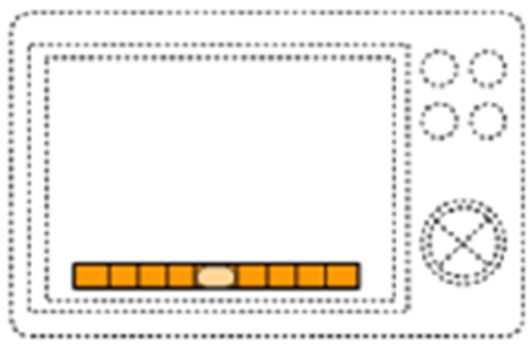 Such a registration (application) method will continue to be accepted even after the revision. Furthermore, with this revision, “images” have been added to the protection targets of the Design Law, so “images” by themselves can be registered as independent items.

Fig. 3 shows only the image part extracted from the example in Fig. 2, but such a single image can be registered as an “image for shooting” (part of a digital camera UI).

In addition, the following images, which could not be registered before the revision, can now be registered because the connection with the article is no longer required.

“Content images”, “game images”, “movies and TV program images”, so-called “wallpaper images”, etc. that do not correspond to any of the above will not be registerable even under the revision.

In this respect, Japanese Design Patent eligibility may still be restrictive compared to Europe, the United States, etc., but it is a major step forward for an “operation image” or a “display image” to be registerable, including images on the Internet and the icons alone. Based on this, we can expect that the utilization of image design rights will advance in fields such as the IoT.

In the image design field, registration by overseas applicants, including applicants from the United States, accounted for a large proportion of the field up until now, but with the revisions, it is expected that this trend will accelerate even further in the future.

For example, the dispute over the image design between Apple and Samsung was a product of a modern take on Design Law, but after the revision, the need for design research will continue to increase in order to avoid the design rights of other companies including foreign companies.

Since “buildings” are real estate and have no distribution in trade, they have long been excluded from protection because they do not correspond to industrially applicable designs.

However, in recent years, efforts have been made to increase brand value by creating ingenuity in store appearances, and differentiating by design even in sales of homes, etc. The design of buildings affects customer attraction and the impact is increasing.

Under such circumstances, the definition rule (Article 2) of the Design Law was revised, and “buildings” were newly added as protection targets.

(2) “Building” to be protected

What is included in the protected “building”?
In the Examination Guidelines for Design, the requirements for being recognized as a “building” under the Design Law are:

In addition to housing and commercial buildings, factories, stadiums, civil engineering structures such as bridges and dams can also be registered (see Fig. 4).

In addition, it is possible to register “multiple buildings” that can be used at the same time as unique designs in accordance with social beliefs. Examples include “school buildings and gymnasiums,” “nursing homes and hospitals,” “commercial buildings consisting of multiple buildings.”

There may be few opportunities to obtain rights for multiple buildings, but due to revisions to the law, the requirements for assemblies and the criteria for judging whether a single unique design is applied will be relaxed, and the system, therefore, has more opportunities for use. I believe this case should be considered as a typical case, and most of the differences between an “assembly” and registration as a single building may be inconsequential.

Until now, prefabricated houses that can be repeatedly mass-produced and traded similarly to movable trade items could be registered as designs for “assembled houses”.

A detailed explanation is omitted here, but the definition of “implementation” is newly established for the newly protected “buildings” and “images”.

Since the definition of “implementation” affects the response to infringement, there is a choice in the application method (whether to apply as an “article” as existed before the revision or as a newly protected “image” or “building”). If there could be a problem with infringement, it may be desirable to consider it while envisioning the implementation of counterfeit products.

Since the interior of stores that provide products and services is an important point of contact with customers, companies have been making efforts to maximize the individuality of and enhance customer satisfaction in the design of the space (interior).

However, the interior of a store usually contains multiple items (for example, tables, chairs, other furniture, etc.), so it is not possible to adapt to the principle of “One Design per Application” (Article 7) of the design system. In the past, therefore, “interior design” could not receive design registration.

In order to make this possible, Article 8-2 (below) has been newly established, and exceptional handling of a “One Design per Application” is allowed for interior design under certain requirements.

<Article 8-2 after revision>
When design related to items, buildings, or images that make up the facilities and decorations inside stores, offices, and other facilities (hereinafter referred to as “interior”) create a unified aesthetic appearance as a whole interior, such design may be applied as a single application and receive design registration.

In order to clarify the requirements for registration of interior designs, the following criteria are set out in the design examination guidelines.

Requirement i) “Facility” in “Being inside a store, office, or other facility” is understood to include movable property if it is “for a person to enter the facility and spend a certain amount of time [there]”.
From the word “interior”, we tend to think of the interior of real estate, but the actual scope of protection is wider, and interiors of movables such as campers, passenger ships, rail cars, passenger planes, and passenger cars can also be registered. In the future, it will be necessary to consider an increasingly wide definition of “interior” of “facility” as the subject of design search and application.

In addition, “partial” interiors of buildings, such as “kitchen interiors” and “bathroom interiors” can also be registered.

And, although it states “inside,” there is a possibility that an open terrace, etc. that continues from the room can be registered as part of the interior.

Next, regarding requirement ii) “Being composed of multiple articles, buildings or images under the Design Law”, it is essential that multiple articles, etc. are included in the application. As an example, the following is a case where a table or chair is placed in the room.

In the design examination guidelines, examples of what are appropriate/unsuitable as components of the interior design are shown as follows.

<Examples of items that are inappropriate as constituents of interior designs>

Those that do not correspond to designs under the Design Law

It is possible to show in the drawing even if it corresponds to an example of improper things (animals and plants). In this case, it is necessary to clearly indicate in the application and drawings that the plants and animals do not constitute the design element.

Also, examples of suitable items include images and products for sale.

In addition to the application that protects the aesthetics of the interior design as a whole, partial designs are used to “effectively arrange images and monitors in the interior or vehicle interior space” and “easy-to-see products in stores.” It seems that it will also be possible to secure rights regarding the “display form”.

If the interior design also considers functionality, it may be possible to further expand the applications of the design system by granting rights to it.

Requirement iii) “The thing that gives a unified aesthetic appearance as a whole interior”, is, for example, “the thing to which common morphological processing / concept is applied to the composition” (see Fig. 5) and the thing which has conceptual commonality. 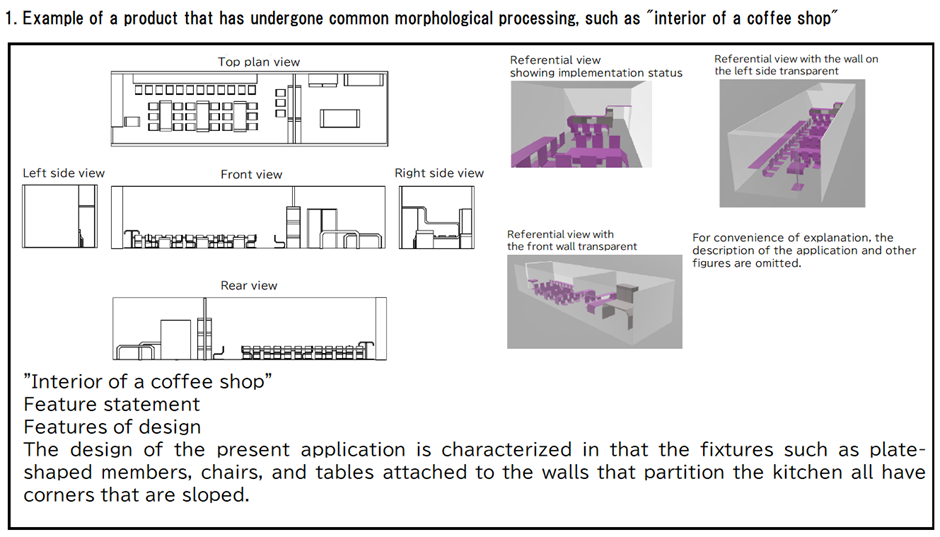 In addition to this, when “The entire interior design is created based on a unified creative idea as one design, and the overall form visually creates one cohesive aesthetic” (see Fig. 6) this requirement is considered to be met. 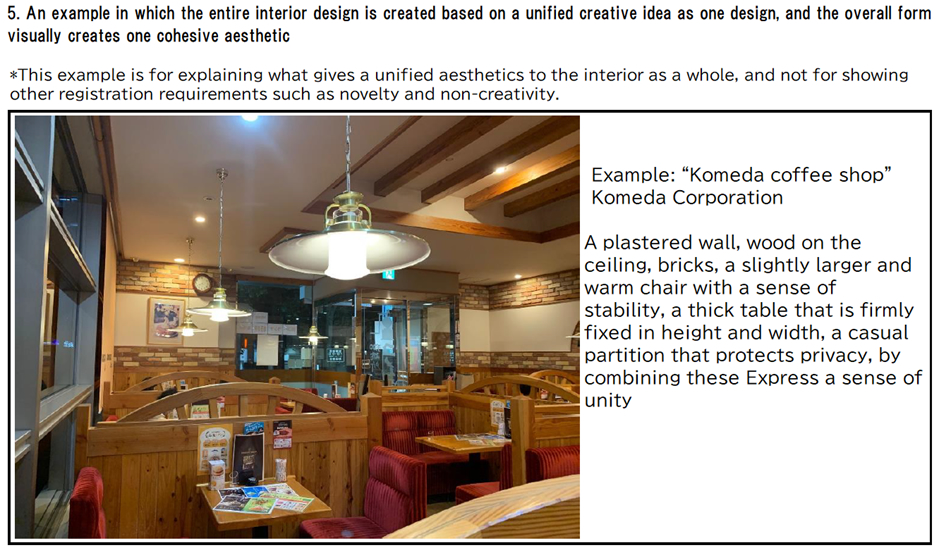 Although it is difficult to concretely imagine what a “unified creative idea” could be when considering the design examination guidelines, one example is shown in the coffee shop example in Fig. 6, in the wall with a plaster motif that was used. It is also said that “interior consisting of ceiling wood, bricks, and a large chair with a sense of stability” can also fall under “Requirement iii)” in that the elements create a unified aesthetic sense. It is likely that it will be regarded favorably during examination.

When applying for an interior design, in order to make it easier to understand in the examination what kind of “unified aesthetics” exist in the application, a specific explanation (for example, “It is recommended to use a motif [of a certain inspiration, such as a forest] to express a sense of unity.”) should be described in the application.

It is said that the drawing of the interior design only needs to show the inside of the facility, and it is not necessary to show the exterior appearance.

In addition, it is necessary to represent “at least one of floor, wall, and ceiling” in the drawing, and it is not permitted to represent “furniture only” as shown in Fig. 7.

Regarding drawings, the JPO will provide new guidelines in the future. (4) Necessity of design survey and review of design application

Traditionally, interior design has not been the subject of design protection, so I think that there was little need to consider the design rights of others for the entire interior of a showroom, booth of an exhibition hall, store, etc.

In addition, if the newly implemented interior design is one that contributes to building your own brand or realizing innovation, it can be said that it is worth considering a design application.

It may become necessary for in-house IP departments to collaborate with departments within the company that have little relation to intellectual property in order to conduct research and extract applications.

Thus, to secure the maximum rights, it is also urgently necessary to identify related departments, inform them of the revised matters, and establish a cooperative system for intellectual property management.

A Leading Japanese IP Firm With a 50-Year History